For most people, having a toothache is no picnic. Although not all gum pain signals a problem that needs to be addressed by a dentist, it is still important to try and relieve the discomfort as soon as possible with effective home remedies. So what can you do if your gums are hurting? Read on for some great tips from our dentists.

So it comes to gum pain

Around 100 billion germs can be found in the oral cavity, which attack the gums every day. Normally not a problem for the gums.

But when the body’s defense system is not functioning optimally, gum problems such as inflammation & bleeding can occur because harmful bacteria attack sensitive areas of the gums or the bone responsible for anchoring the tooth.

Sore gums are usually a sign of inflammation or another dental disease.

First, inflammation attacks the soft and hard tissues around the tooth. The affected gums tend to bleed more, they may ulcerate, and the teeth become loose.

Gum inflammation is often not taken seriously, although it forms the basis for many other diseases.

Even mild inflammation of the gums increases the risk of arteriosclerosis, according to the MHH Clinics for Dental Prosthetics and for Cardiology and Angiology.

Recognize symptoms as soon as possible

In the beginning, gingivitis usually does not cause pain.

However, if pain and increased bad breath occur, it could be chronic gum inflammation (called “chronic gingivitis”). It leads to long-term gum recession.

If in doubt, it is best not to try to solve the problem alone, but contact your dentist. This can help you in a personal conversation better than an article on the Internet.

The gums are irritated and swell in the spaces between the teeth. However, the swelling may spread beyond this area

In severe cases, pus may also form, which emerges when pressure is applied under the gums. In addition, the surrounding lymph nodes can swell. 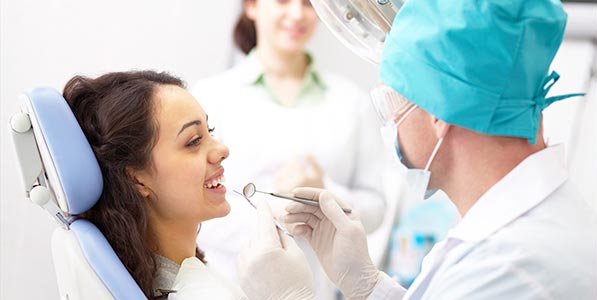 If you have a toothache, it’s always best to see a dentist.

The causes of gum pain

Bacteria process food residues on and between the teeth to form plaque, which coats the teeth. This coating, in turn, is medically referred to as “biofilm” or “plaque.”

Tartar also forms. Plaque is the perfect breeding ground for bacteria, which can spread there particularly well. They release aggressive metabolites, acid and toxins that are ultimately responsible for gum inflammation.

Gingivitis is a typical inflammation of the gums that affects the soft tissue and is easily treated. It is an inflammation from the gums due to bacterial infestation that is usually not painful

If gingivitis is left untreated, periodontitis can develop. This disease penetrates into the periodontium and can lead to tooth loss.

The cause of the clinical picture of periodontitis is bacteria that spread between the tooth and the surrounding tissue with the inflammation in the gingival pocket toward the tip of the tooth root.

The root tip lies under the gums and gives the tooth its support.

Correct oral hygiene is the best prevention for painful gums

To prevent the spread of bacteria, teeth should be brushed at least twice a day for 2-3 minutes each time – but ideally about 30 minutes after each meal.

The correct execution and technique is best demonstrated by the dentist. If a mouthwash is used, it should contain essential oils and fluorine, but no alcohol. This dries out the gums namely.

Heavy smokers who smoke 10 or more cigarettes a day have a significantly higher risk of developing periodontitis than nonsmokers.

In addition, the disease often spreads more quickly in them and treatment is less effective.

Smokers have up to a 15-fold increased risk of periodontal disease, depending on cigarette use.

Diet can influence the course

Diet plays a large role in the development of gingivitis. If the immune system is compromised by poor nutrition, the inflammation usually spreads more quickly.

Highly acidic foods and drinks weaken the gums. In addition, vitamin C deficiency can contribute to a weak immune system.

Be careful with dentures

Inappropriate dentures (fillings, dental crowns, bridges, or implants) or insufficient denture care can be a reason for spreading gum problems

Inadequate denture care can lead to fungal infections, which can spread extensively between dentures and the roof of the mouth.

These symptoms may be hereditary. About 30% of the population has a predisposition to periodontitis. A smear test can determine if the responsible IL-1 genotype is present in the body.

If the salivary glands produce too little saliva, the mouth becomes dry, often burns, and is more susceptible to disease. Bad breath and dental problems set in when harmful bacteria take over

Untreated tooth decay, tooth erosion, teeth grinding and clenching with abrasion of the teeth, dry mouth from medications, or salivary pH changes can cause or exacerbate gum disease

The same is true for general diseases such as diabetes, leukemia, or immune system disorders, as well as mucosal diseases (e.g., lichen planus) of the oral mucosa.

Drug side effects pose a risk

Gingivitis can be related to the hormonal system. For example, pregnancy, puberty, menstrual cycle or uncontrolled diabetes, among others, may play a role here.

A dentist should also be consulted for problems that occur along with brittle nails or skin problems.

A professional dental cleaning is recommended by dentists twice a year

Diagnosis by the dentist

Remember: A reliable diagnosis can only be made by a dentist.

These initial measures aim to eliminate the external causes of periodontal disease, thereby creating the conditions for healing.

This is followed by possible Deep Scaling

Deep scaling, or thorough scraping of the pockets and root surfaces located below the gum level, is performed under local anesthesia

It is usually not painful.

In individual cases, this is followed by antibiotic therapy or PDT laser treatment.

Tablets such as amoxicillin, metronidazole, or doxycycline are prescribed by the dentist over a period of one to two weeks.

But the antibiotics can also be massaged locally as a gel into the affected pockets. However, this method is only effective if there is no tartar or plaque in the pockets.

The success of mixed therapies such as deep scaling combined with antibiotic tablets is being proven by more and more studies.

In this treatment, a special light-sensitive dye is placed in the pockets and irradiated with a laser. The energy from the laser light is absorbed by the dye destroys the cell walls of the bacteria.

The bacteria are killed, while healthy cells of the periodontal tissue remain untouched. This method is usually completely painless and quick.

However, even with this method, the pockets must first be cleared of tartar and bacteria.

In addition to daily dental care with toothbrush, toothpaste, and floss, mouthwash and gum gels can also be added.

in the case of gingivitis, in addition, to start brushing each day in a different section of the mouth.

To protect the gums, many dentists advise to resort to medium-hard or even soft toothbrushes and apply them at the gumline at a 45° angle without excessive pressure.

Sonic toothbrushes can also help, because with them the brush head does not move, but only vibrates gently. Small bubbles in the toothpaste provide the cleaning instead of the usual scrubbing.

Note: You can read more about how ultrasonic toothbrushes work in this guide.

If the gingivitis is mild and not chronic, several home remedies can provide quick relief.

The inflammation may be inhibited by mouthwashes, which can help it heal faster. However, keep in mind that all home remedies mentioned here do not replace treatment by a dentist

They can only support the treatment of inflamed gums, not replace it.

Applied directly to the inflamed area to relieve inflammation. Suitable may include:

Summarized the most important for prevention

The risk of gingivitis can definitely be reduced through comprehensive oral hygiene and a healthy diet, even if you can’t completely eradicate the risk.

If brushes or floss slip too easily through the gaps, another method must be used. Oral irrigators clean the interdental spaces, for example, with a jet of water.

The tongue surface should also be regularly cleaned of bacteria with a tongue cleaner. Mouthwashes with an antibacterial mouthwash can additionally help prevent bleeding gums

Stress prevention or relaxation techniques can help if.

Regular checkups and professional dental cleanings will detect any existing problems, and any tartar or plaque that builds up will be removed here.

Sugary foods and acidic beverages should be enjoyed only in moderation, as sugar attacks tooth enamel and can cause bacteria to take hold.

In addition, one study found that reduced carbohydrate intake and increased intake of foods containing omega-3 fatty acids, vitamins C and D, antioxidants, and fiber lowered the risk of gingivitis.

FAQ, Gum Pain, How to

How to Reduce Swelling After Wisdom Teeth Removal