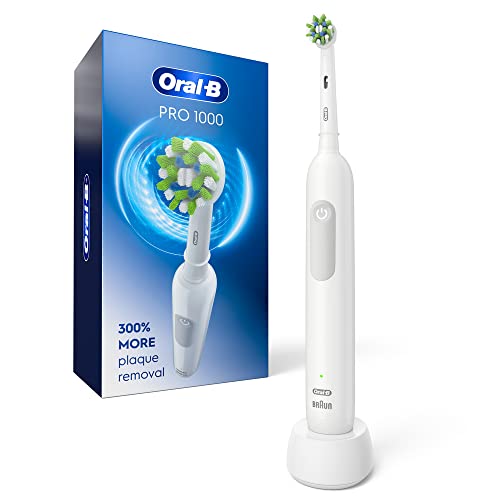 The Oral-B Professional Care 1000 is our pick for best electric toothbrush because it removes more plaque than sonic brushes and doesn’t have too many bells and whistles.

It’s been 52 years since the first electric toothbrush debuted and there’s still no conclusive evidence that they’re really any better than your standard manual one. What dentists and the ADA do agree on is that maintaining overall oral health and hygiene is ultimately about diet, flossing regularly and how you brush, not what you brush with. That said, some newer electric toothbrushes do offer distinct advantages over your standard bristle stick–advantages that, depending on what you’re looking for, can justify the higher price you’ll inevitably pay. 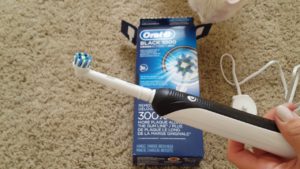 For instance, some (the oscillating kind) have been shown to remove slightly more plaque (7 percent) than regular toothbrushes. Other studies have concluded that people tend to brush longer when they use an electric toothbrush, as the experience is generally easier and more enjoyable. Because of their smaller heads, many electric toothbrushes can also access harder-to-reach areas in your mouth, a good thing if your manual brushing skills are lacking.

The trick these days is figuring out what features are actually useful and what’s needless filler. If you just want a solid electric brush, but don’t care about things like built-in and UV sanitizers (which are total BS, according to the ADA), smiley face icons, and LCD screens, the Oral-B Professional Care 1000 is a fantastic choice.

The 1000 is on the cheaper end of the Within the seven-brush Oral-B lineup, but that’s mostly a result of eschewing the frivolous features everyone seems to be cramming into their higher-end electric brushes these days.

Going up in the Oral-B lineup gets you largely needless bells and whistles, like a separate wireless smart guide that communicates with your toothbrush and tells you how to brush or a bulky extra head storage unit built into the charger base, which is very annoying when it comes to travelling, and extra vibrations, which don’t do much for cleaning. Going down any further, however takes away legitimately important features like a vibrating brush head.

To reach the optimal two-minute brush time goal, the 1000 sends out a vibrating pulse every 30 seconds with a longer pulse at two minutes. Ideally, you can use these intervals to clean each of the four quadrants of your mouth. There’s even a pressure indicator that stops the brush when you’re brushing too hard.

As far as reviews go, the 1000 gets a recommendation from Consumer Reports. They tested 10 electric toothbrushes, rating each on comfort, convenience, ease of use and plaque removal. The 1000 finished with a respectable 3rd place score of 71/100. It was bested only by a Phillips Sonicare brush that costs twice as much, and it’s older (more expensive) brother, the 4000, which garnered the highest ratings of any electric brush (82). Their tests showed that the 4000 removed more plaque than the 1000 with the former receiving an “excellent” rating and the latter a “very good”. One possible explanation for this could be the difference in pulsation rate between the two models. While both the 1000 and 4000 oscillate at 8800 RPM, the 4000 pulsates at a much faster 40,000 pulses per minute compared to the 1000′s 20,000. When we tested both models side by side, there was definitely a noticeable difference in the amount of vibrations, the end result was the same in our tests. It is also worth noting that both of these tests were based off of the previous Triumph Professional series models so the results might not be directly analogous.

Another feature you lose by going with the 1000 is multiple cleaning modes. The 1000 has only one mode of operation (daily clean) whereas both the 4000 and the slightly cheaper 3000 have three: daily clean, a slow and gentle “sensitive” mode, and a “whitening” mode, which supposedly polishes your teeth by varying the bristle speed. Our tests showed the multiple modes to be more annoying than helpful. That’s because the button on the 3000 does not click like it does on the 1000. A simple slip of the finger can cause it to change modes, requiring you to reset the toothbrush and mess up your brushing timer. On the other hand, the 1000 has only one mode, and its power button has a satisfying click that keeps you from accidentally activating it.

It is also worth mentioning that many Amazon reviews of the 1000 complain that the pressure sensor did not stop the spinning when they felt it should have, we also found this to be the case so hamfisted users beware. When testing the 3000, we were unable to locate, let alone activate any type of visual pressure warning either. Moral of the story: try to brush more gently, not too difficult.

I tested the 1000 and the 3000 by brushing the left side of my mouth with one and the right side with the other for one minute on each side, twice a day for a whole month. At the end, I consulted my local dentist who told me that there was no difference in cleanliness whatsoever between the two sides. They went on to say that they had actually tried the same experiment for themselves and arrived at the same results. This dentist added, “it doesn’t matter if you have a $30 brush or a $130 brush. The only factor that actually makes a difference in cleanliness is how long you brush, how small the head is—so it can better fit in tight spots, and how thorough you are.”

Which brings us to Oral-B’s main competitor: Philips’ line of Sonicare brushes. While many of these brushes also garner high ratings, almost all of them have vibrating heads. Unlike the Oral-B’s triple-action brushes, Sonicare’s heads simply vibrate back and forth at a high rate of speed. Some users claim this is gentler on the gums, but the evidence also seems to show it’s not quite as effective at cleaning. Another bonus? Oral-B replacement brushes tend to be cheaper (not cheap though), on average about $5 less for a four-pack than Sonicare replacement brushes. 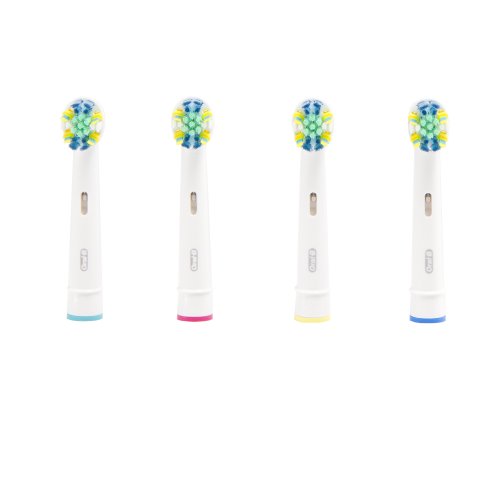 For those who want a deeper clean, spend the money you saved by going with 1000 to upgrade to a set of the aforementioned Floss Action brush heads. However, those with sensitive teeth or gums might want to stay away because many user reviews report that although these heads clean better, they’re also significantly harder on the teeth and gums. It’s also worth noting that these are larger than the usual Precision Clean heads and thus may not be able to fit as well into tiny spaces. Your mileage may vary. Finally, a word of warning when buying replacements online, make sure that you are buying from a reputable retailer (if you’re getting them from Amazon, make sure that under “In Stock” it says “Ships from and sold by Amazon.com. Gift-wrap available.”). There have been reports of some vendors selling knock-off heads that are of poor quality and fall apart easily.

Is Oral B the same as Braun?

He also created the Oral–B brand name. Braun, also part of the Gillette group at that time, started to use the Oral–B brand for electric toothbrushes. Oral–B has been part of the Procter & Gamble company since 2006. A company representative has stated that the “B” in Oral–B stands for “brush”.

Does Oral B 1000 have a pressure sensor?

The Oral–B Pro 1000 electric toothbrush comes equipped with a pressure sensor. This feature monitors the pressure that you put on your teeth and gums when brushing.

The Oral B Pro 1000 uses 3D cleaning action (rotates, vibrates and pulsates) to remove up to 300% plaque than the manual toothbrush compared the Oral–B Pro 500 that uses 2D cleaning movement (rotation and vibration) capable of removing only 100% dental plaque.


How long should Oral B electric toothbrush last?

Depending on which model you have, your Oral–B electric toothbrush should take between 14 and 22 hours to fully charge the brush, and should last for between 5 and 14 days of brushes (when brushing twice a day, for 2 minutes each time).

Do all Oral B toothbrushes have the same power?

Our Oral–B 1000 models are an excellent choice and they are all actually the same unit in terms of power and technicality. The difference between them is the brush head which comes in the box (eg. CrossAction 1000 will have a CrossAction toothbrush head), and the color of the toothbrush handle.

Which is Better Oral B or Sonicare?

The Philips Sonicare DiamondClean has a much better battery life that can perform for almost two times as long as the Oral B 8000 once it is fully charged. It also comes with a high-quality Lithium battery that doesn’t take a long time to charge. This one is hard to answer, because it all depends on your preference

Which is better battery or electric toothbrush?

Battery-powered toothbrushes require you to provide all or most of the brushing action, moving the brush back and forth along all sides of your teeth and gums. In contrast, rechargeable electric toothbrushes provide the cleaning action while you need only guide it along all surfaces.

One thing is certain: You’re going to pay more to use an electric toothbrush. Once you buy the brush itself, you’ll be replacing the brush heads every month or two. But, hey, if buying one helps prevent a couple of cavities and extra trips to the dentist’s chair, going electric can certainly be justified.

What to Do If You Chipped or Broke a Tooth