Third molars are by far the most mysterious teeth in our oral cavity. Yet our distant ancestors believed them to be the sign of maturity and even wisdom, obviously because they erupt at a rather adult age.

But this is not the only mystery about the wisdom teeth. Apart from first cutting through the patient’s gums in his late teen years or even mid-twenties, the third molars have no preceding set of primary teeth. And even more mysterious mist gets blown to the third molars matter, with the questions patients frequently ask their dentist: “Does everyone have wisdom teeth?“

“And if not, is it dangerous for my oral health and do I need any special dental treatment?” Hope, the latest findings of the American and Canadian Dental Associations’ experts will help us to clear up the mysterious mist around the missing third molars.

When Should I Expect My Wisdom Teeth To Erupt? 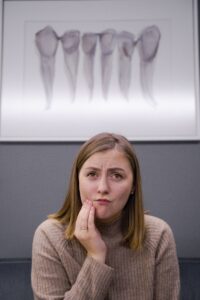 According to global dental practices, the third molars start their formation in young patients’ oral cavities not earlier than the age of ten years and, thus, they are expected to grow through the gum line somewhere between the age of 16 and 24 years.

But what should you do if all the due dates have already passed, but no signs of the third molars’ eruption is apparent?

Does Everyone Have Wisdom Teeth?

The ADA experts seem to have revealed clear and grounded answers to the question “Does everyone have wisdom teeth?” A number of clinical studies have revealed that about 25-35% of the Earth’s population will never develop their third molars, and about 30% of individuals will grow from three to just one wisdom tooth.

What is more, Canadian Dental Association experts provide well documented evidence of rare cases when patients developed even more than four wisdom teeth. However, these extra third molars are usually impacted and thus have to be surgically removed.

Is the Missing Third Molars Abnormality Dangerous for Me?

Typically, the positive answer to the question “Does everyone have wisdom teeth?” does not necessarily indicate that something is wrong with your oral health. This dental abnormality is most commonly associated with a hereditary pattern.

For instance, if one of your parents has never developed his wisdom teeth, there is a rather high chance that you also will never grow them. Another explanation of the missing wisdom teeth abnormality is based on purely evolutionary theory to be reviewed in one of the next paragraphs.

However, the scientists still fail to come up with a uniform theory on the “Does everyone have wisdom teeth” issue; equally, they cannot explain why the number of third molars frequently varies between individuals.

ADA experts warn that each missing wisdom teeth must be carefully monitored by experienced professionals in the dentistry field, since patients tend to confuse this abnormality with the major disorder of impacted third molars. Badly impacted wisdom teeth stay tucked deep below the gum line, frequently revealing only minor signs of inflammation.

Unlike missing wisdom teeth, which require no special dental treatment, impacted ones call for major surgical invasion to remove them.

Why Do Increasing Numbers of People Fail to Grow Their Third Molars? 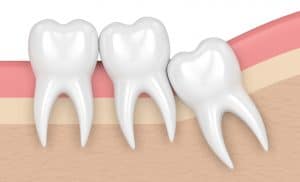 Studies by CDA experts reveal that an increasing number of young adults fail to grow their third molars. This suggests that the answers to the questions “Does everyone have wisdom teeth” and “What are the circumstances around this dental abnormality?” should be asked of evolutionary biologists.

Anthropologists explain that the very existence of wisdom teeth is actually the evolutionary answer to the cavemen’s diet, which was primarily composed of rough foods, including hard meats and nuts plus difficult to chew leaves and roots.

These foods obviously required more chewing strength from human teeth and, thus, led to extensive wear. That is why the second molars used to almost completely wear out before the wisdom teeth arrived, leaving plenty of room for the fresh set of teeth.

What is more, the rough foods diet, coupled with the lack of knives or other for chopping meat , used to intensively train the caveman’s chewing apparatus and therefore, led to increased growth of his jaw bones. This created enough room for the new third molar to grow into.

On the other hand, our soft processed foods as well as tools, such as knives and forks, to assist chewing, not to mention blenders, rapidly resulted in the atrophy of the modern human’s chewing apparatus, which became obvious in only a few generations.

Modern lifestyles not only made the answers to the question “Does everyone have wisdom teeth” commonly negative, but also triggered the numerous impactions and misalignments of third molars, associated with the modern human’s small jaw size.

However, CDA experts do not find the negative answer to the commonly asked question “Does everyone have wisdom teeth?” to be dangerous for their patients’ oral health. They treat the third molars as vestigial organs, which are nowadays non-functional parts of the body, which have lost their importance during the evolution of the human species.

So, the answer to the question “Does everyone have wisdom teeth?” is obviously negative. What is more, the missing third molars abnormality causes no harm to your oral health, but still needs regular professional dental monitoring to eliminate the possibility of impacted wisdom teeth. In fact, wisdom teeth are now considered to be vestigial organs which, with evolution, no longer have any purpose while you bite and chew food.

This is because human jaws have grown smaller with evolutionary history and wisdom teeth may end up impacted or blocked by surrounding teeth. There is also the chance of food getting trapped in the surrounding gum tissue when the tooth erupts, leading to bacterial growth and serious infections.

There is a chance of people who don’t get wisdom teeth suffering from problems like crowding or displacement of permanent teeth and, in rare cases, cysts may develop in the soft tissue surrounding the wisdom tooth.

These cysts may develop into jaw expansion, bone destruction and damage to surrounding teeth. There is also the risk of tumors developing in cysts and there is the risk of the jaw breaking if the tumor or cyst grows rather big.

If you have wisdom teeth which you plan to take out, it’s better done when you are a young adult, to prevent possible future problems and ensure optimal healing after the surgery. There is also a higher risk of developing complications and going through a longer recovery period if the wisdom teeth are removed later on.

There is also the risk of developing complications if the wisdom teeth are removed after the age of 35, so it’s proven that, while not everyone may get wisdom teeth, as they are not much of functional teeth nowadays, there is no need to worry about anything if you don’t get wisdom teeth!

How to Brush your Teeth with Braces Properly