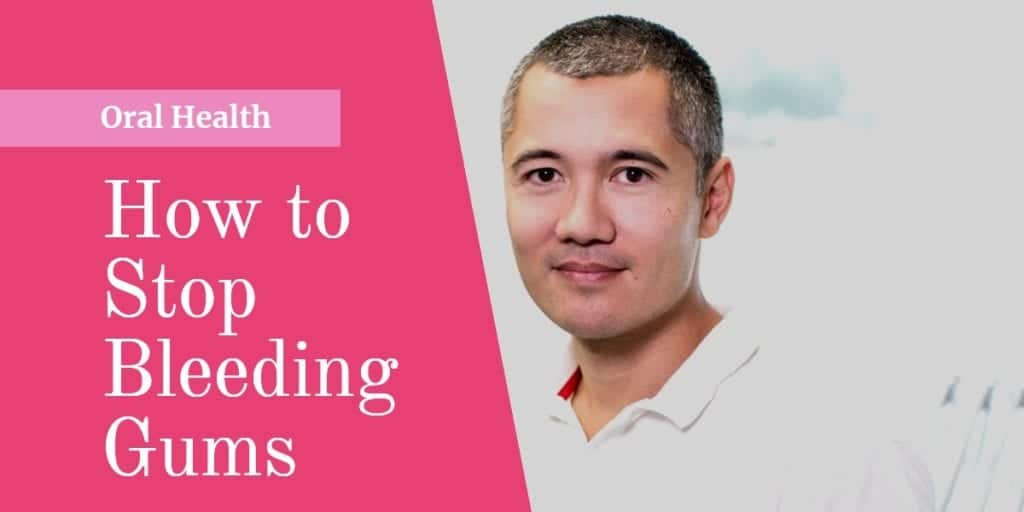 Do you have bleeding gums? You’re not alone. It’s estimated that over half of adults have some form of gum disease, with almost 8% experiencing regular bleeding. But before you panic, let’s look at the facts so you can gain a better understanding and take steps to improve your oral health!

The American Dental Association says that the best way to prevent gum disease is by brushing, flossing, and visiting your dentist twice a year for check-ups. While these are all good things to help promote oral health, it’s not always enough if you have bleeding gums. Bleeding gums can present itself when you brush your teeth or when you’re flossing; sometimes it can be worse when you’re just rinsing and other times it won’t bleed at all. If this is happening to you, here’s what you need to know about bleeding gums:

Do your gums bleed when you brush your teeth? If yes, then it’s something you need to take seriously. Many times bleeding gums are actually a symptom of a more serious condition that can negatively affect your dental health and overall well being. So you cannot afford to ignore it and you should take proactive steps to ensure that the problem is fully addressed.

Bleeding of gums is a very common gum problem, with as much as 90% of the population experiencing this condition at one point or another in their lives. In many instances, it happens while brushing and can be a sign of trouble. There are several factors that may act separately or together to cause bleeding, swelling or discomfort in your gums.

Gum disease is the most common cause for gum bleeding, and is the condition that results from the buildup of cavity-causing bacteria and plaque. The initial stage of gum disease is referred to as gingivitis. If left untreated, gingivitis progresses into the more serious gum condition called periodontitis and finally tooth loss.

Gum disease occurs when the bacteria in dental plaque releases harmful substances that degrade the gums and the jaw bone by causing them to become infected and inflamed. In addition to bleeding, gum disease symptoms can include: persistent bad breath or bad taste in the mouth, loose or shifting teeth, formation of deep pockets between teeth and gums, changes in the way teeth fit together on biting or changes in the fit of partial dentures, and red, swollen or tender gums.

3. What causes bleeding gums after brushing?

Gums that bleed during or after tooth brushing or during flossing are a sign of gum disease. It is usually very difficult to cause healthy gums to bleed even by vigorous brushing. However, in rare cases, overzealous brushing can cause harm to the gums and lead to bleeding. Gums consist of delicate tissue and brushing the wrong way can irritate and damage them, thus making them sore and likely to bleed.

4. Why do gums bleed when flossing?

5. Why do gums bleed when pregnant?

An increase in the levels of the naturally-occurring hormones is the main cause of this gum problem during pregnancy. Pregnant women experience sudden and dramatic increases in progesterone and estrogen hormones, as well as changes in the amount and activity of a number of other hormones.

One of the consequences of these hormonal changes is increased blood flow to the gums, which makes them to become swollen, sensitive and red and, therefore, more likely to bleed. To determine the exact cause of gum bleeding during pregnancy or any other time in your life, it is important to see your dentist at the first sign of the problem. This health care professional can evaluate your condition and prescribe the best treatment for your case.

6. Does bleeding gums cause bad breath?

Bad breath, together with gum bleeding, is one of the symptoms of gum disease. So it is not caused by bleeding, but rather occurs together with this gum problem as one of the signs of gingivitis or periodontitis. The bad breath is usually caused by the smelly gases released by the bacteria found on the plaque that coats the teeth, gums and tongue of individuals who have gum disease.

7. What is the best mouthwash for helping bleeding gums?

The best mouthwash for treating this gum problem should have excellent antibacterial properties. Such a mouth rinse will kill bacteria on contact and diminish the amount of plaque in your mouth, effectively stopping germs from attacking your germs and causing bleeding.

Look for a quality antibacterial Mouthwash For Gingivitis that is formulated to fight plaque and gum disease and that has the approval of the nation’s Dental Association. A prescription mouthwash, such as Chlorhexidine, can be extremely effective at eliminating this problem, as prescription mouth washes have stronger antibacterial properties needed to eliminate bleeding-causing germs.

8. What is the best toothpaste to use for helping bleeding gums?

The best toothpaste for bleeding gums will remove plaque from the teeth and kill microorganisms in the mouth that can attack gums and lead to gum disease. It will contain a number of ingredients, including germicides or antibacterial agents, which kill bacteria without being too harsh or abrasive on your teeth and gums.

10 Everyday Tips for Taking Care of Your Bleeding Gums

Improving your oral hygiene is the most effective way to ensure that the tooth plaque that causes inflammation and bleeding in the gums is kept to a minimum. Make sure you brush your teeth at least two, but preferably three, times per day.

2. Use the right brushing technique.

When you are brushing your teeth, make sure you follow the right technique. Avoid overly vigorously brushing your teeth or a hard back-and-forth motion, as this can irritate or damage your gums. Use gentle, circular motions to massage and clean your teeth and gums, instead. While at it, try to direct the toothbrush bristles underneath the gum-line to disrupt bacterial growth for plaque formation.

3. Use the right toothbrush.

Choosing the right toothbrush is also vital to successful removal and prevention of plaque buildup. Look for one with soft nylon bristles that feature blunted ends. Avoid those firm-bristled toothbrushes, as they can exacerbate your gum bleeding problem when pressure is applied during toothbrushing.
If you’re still confused about the proper brushing technique or toothbrush, ask your dentist or dental hygienist for tips.

Flossing is an important component of ensuring optimal oral health essential for preventing gum problems and conditions. It dislodges food, tooth plaque and other foreign particles that are caught in spaces between the teeth and gums and all of those hard-to-reach areas. But remember to be gentle when you floss. Wrap the floss around a tooth so it is shaped like the letter C. Glide the floss slowly yet firmly in an up-and-down motion and repeat this process for each tooth.

The health of your gums, teeth and mouth depends very much on good nutrition. A nutrient-rich diet promotes good gum health whilst also providing for optimal health of the whole body. On the other hand, nutritional deficiencies, including lack of Vitamin A, Vitamin C, Vitamin D or calcium, Vitamin E, B vitamins, Coenzyme Q10, bioflavonoids, Zinc and other nutrients, can accelerate the inflammatory process that leads to gum disease and eventual bleeding. To boost oral health, make sure you eat a nutrient-rich diet based on natural foods like vegetables, fruits, whole grains, fish, beans and seeds; and stay away from sugar, sugary foods, refined carbohydrates, refined polyunsaturated fats, artificial additives, allergenic foods, salt and alcohol.

Drinking water not only keeps the body and gums hydrated, but it also stimulates production of saliva – which is essentially the body’s greatest defense against the bacteria that cause gum disease and eventual bleeding. Drinking water, especially after a meal, also helps wash food particles off the teeth and mouth, making it less likely that the bacteria in the mouth will form damaging plaque.

Tobacco smoke not only prevents the gums from getting the nutrition that they need, but it also promotes the formation of gum-damaging plaque. If you’re a smoker and have already developed bleeding of the gums, you should consider quitting. While quitting can be tough, it is the only way you can save yourself from the risk of certain cancers, heart disease and gum problems such as bleeding.

Bleeding of the gums is a bacterial infection that is contagious. If you’re living with someone with gum problems, you should avoid anything that comes into contact with his or her mouth, from water glasses to toothbrushes.

Too much stress can be detrimental to oral health. High amount of stress can affect your oral and gum health in a number of ways.

Firstly, stress can trigger significant increases in inflammatory activity in the body. Increased inflammation levels in the gums are the main factor that causes gum disease and bleeding. Excessive stress or chronic stress is also known to suppress the body’s natural immune capabilities. If you’re always stressed, then your body will find it difficult to fight infections including oral problems like bleeding.

Thirdly, high-stress levels may lead to a condition known as anhedonia, or the lack of interest in activities, especially ones that a person used to find pleasurable. This might mean activities like brushing and flossing your teeth or preparing a healthy meal may become uninteresting and difficult to engage in, and this lack of motivation could cause your oral health deteriorate and the bleeding to become worse. So take proactive steps to reduce stress in your life to experience improvement in your dental health and overall well being.

Having your teeth professionally cleaned at least twice a year will help to keep your teeth free of tooth plaque and gum problems like bleeding. Your dentist, or dental hygienist, will use special tools to power clean teeth to remove plaque buildup and flush out bacteria, food particles and other foreign matter that has accumulated in the space between teeth and under the gums.